Description: ‘Virginised’ is a 50 minute solo by Chris Scherer which expolores dance culture from the perspective of a dance stereotype.

The audience is invited to meet Brandon, a jazz addict who desperately strives to hold onto an identity defined by dance. Through the use of documentary, mocumentary and fiction, the artist Chris Scherer, will deconstruct Brandon to articulate the line between performer and character.

Performers must transform. They sculpt their body, voice and mind to bend the audience’s perception of reality. To do this they have a process of exploration, research, play and imagination. Characters such as Brandon are rooted deeply in the performer. They are extensions of an artist’s personality, mind and memory. In ‘Virginised’, Chris will not build a character, but instead deconstruct one questioning how a character takes on a life of its own and where the separation of reality and fantasy becomes unclear to challenge perceptions of identity.

Performed and Devised by 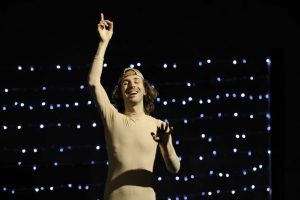